1. Frankenweenie is a remake of a Tim Burton’s 1984 short film also called Frankenweenie, both films are a parody and pay homage to Frankenstein 2. Tim Burton borrowed the design of the character Family Dog for Sparky and if you haven’t guessed already, he’s a playful bull terrier.

3. The sound stages were then divided into 30 separate areas to deal with the handcrafted, frame-by-frame style of filmmaking. Compared to other stop-motion animation sets, Frankenweenie‘s set is much larger.

4. There was around 200 separate puppets used, and about 18 different versions of Victor. Young Victor Frankenstien is voiced by Charlie Tahan.

“That was the impulse for the whole thing, remembering the dog,” says Burton. “It’s like your first love. It’s the first time you experience those kinds of feelings. With the right pet, it’s all very pure.”

6. Did you know there is a Nightmare Before Christmas record in Victor’s attic workshop a little easter egg for you.

7. In a local newspaper that has mentions of Edward Scissorhands (“Man With Scissorhands Wins International Topiary Contest”), Willy Wonka and Big Fish.

8. The film is very personal to Tim Burton and was based on his own life even the supporting characters were mixtures of people that he had met, like in the movie, Burton’s father was a baseball coach trying to get his son to play on the Little League team.

9. Within the first seconds of the movie the iconic Disney castle logo/intro turns into to a dark place. 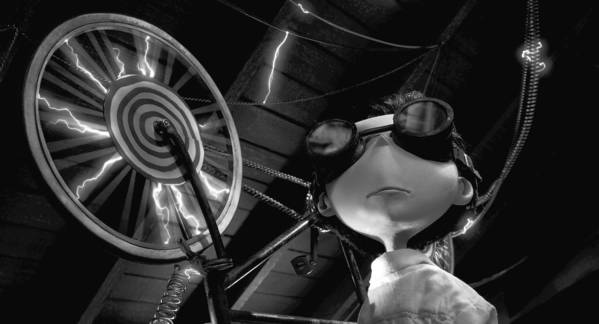 10. I think it is rather creepy but the puppets have real human hair!

11. Edgar is voiced by Atticus Shaffer and he is a play on Frankenstein’s “Igor”

Frankenstein’s “Igor” is the hunchback lab

assistant in the Frankenstein series.

12. Weird Girl is an “unique” girl, one of Victor’s classmates, who is obsessed with the psychic predictions of her cat, Mr. Whiskers she is voiced by Catherine O’Hara, who worked with Tim Burton in Beetlejuice as the second wife Delia, and she was also the voice of Sally in The Nightmare Before Christmas.

13. Elsa is Victor’s neighbor she is voiced by Winona Ryder. Ryder worked with Tim Burton in Beetlejuice as Lydia Deetz,  the goth teenager and also worked with him in Edward Scissorhands as Boggs’ teenage daughter, Kim whom Edward falls in love with.